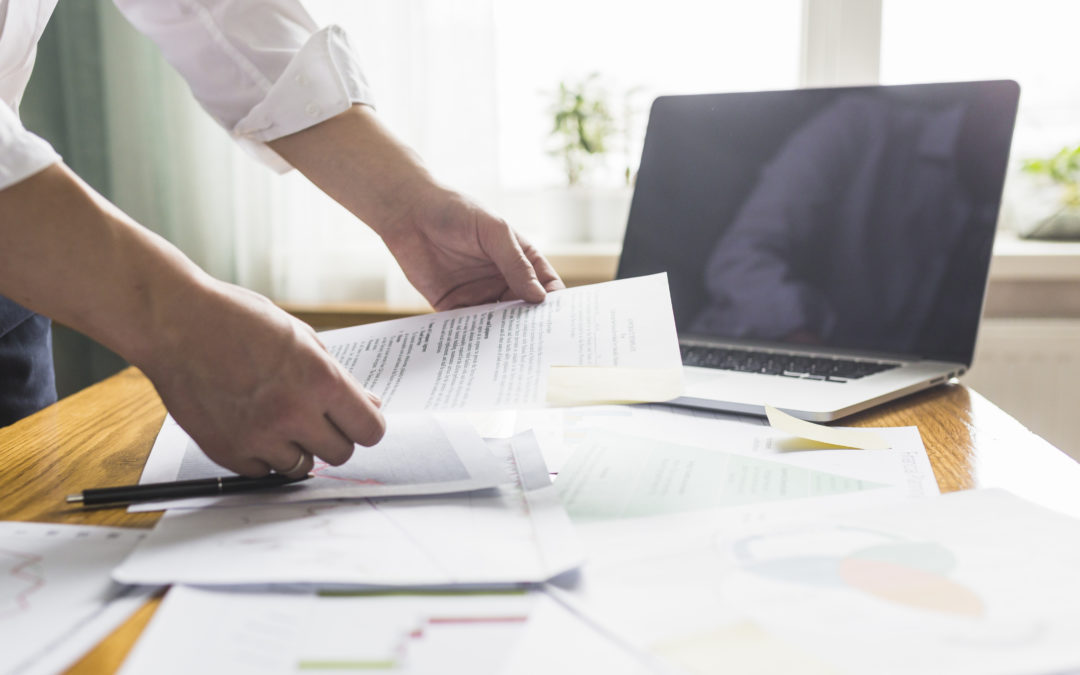 In March 2018, a package of laws popularly referred to as the “Constitution for Business” was adopted, which includes, among others, the Act on the rules for the participation of foreign entrepreneurs and other foreign persons in business transactions on the territory of the Republic of Poland (hereinafter: the “Act on the Rules for Participation”) and Entrepreneurs’ Law. It is worth taking a closer look at the categories of people and companies that can do business in our country. There have been rules governing the participation of foreigners in business transactions in Poland. Therefore, the Act applies to companies having their registered office outside Poland and foreigners without Polish citizenship conducting business activity in Poland.

It is worth remembering that if foreigners who want to start a business in Poland come from a country belonging to the European Union, they can do it on the same terms as Poles and no restrictions are imposed on them. However, if they come from countries not belonging to the European Union, they must meet the additional requirements specified in the Act. Persons who do not belong to the two categories mentioned above will have limited access to doing business in Poland, but it still will be possible. Foreign persons who do not meet all the conditions, i.e. citizens from outside the European Union and EFTA, who do not have appropriate permits, and companies from outside the Union and EFTA, have limited access to trade in Poland. They can carry out economic activity in Poland only in the form of a limited partnership, limited joint-stock partnership, limited liability company or joint stock company. Foreign entrepreneurs may also create and run representative offices on the territory of Poland. The scope of their activity may only include conducting activities in the field of advertising and promotion of a foreign entrepreneur. Another option is to create a branch for conducting business activities in Poland. A foreign entrepreneur as part of a branch may carry out economic activities only to the extent that he conducts this activity abroad.

The number of foreigners who decide to open their own businesses in Poland is increasing every year. Based on the analyzes carried out by the Central Economic Information Center, it appears that at June 30, 2019, there were 82,508 companies with foreign capital in the Register of Entrepreneurs at the National Court Register. When it comes to the number of companies set up by foreigners each year, the statistics are as follows:: in 2015, there were 6706 such companies, in 2016 – 7122, in 2017 -7282, in 2018 – 7878 companies, and by mid-2019 4363 companies. The largest number of such companies opens in Mazowieckie Voivodeship (46.84%), followed by Dolnośląskie (7.78%) and Wielkopolskie 7.72%. 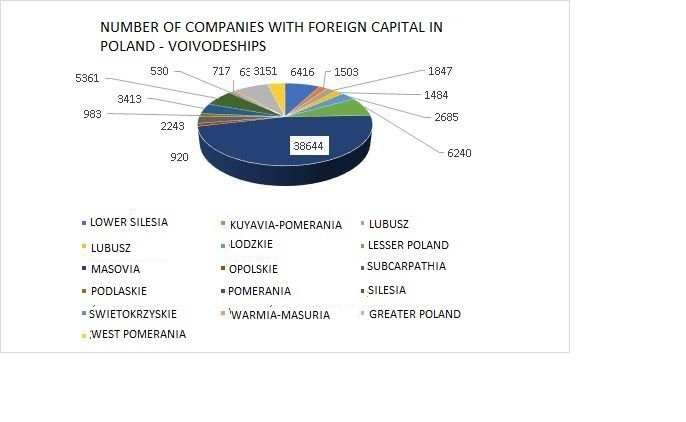 The largest number of companies as the main subject of activity indicated other consulting in the field of business activity and management 4200, non-specialized wholesale trade 3387, activities related to software 2835, rental and management of real estate 2601, implementation of construction projects related to the construction of buildings 2560.

Based on the analyzes carried out by the Central Economic Information Center, it appears that from January 1, 2019 to the end of December 2019, 8,820 companies with foreign capital were established among newly registered companies in the National Court Register. This represents an increase of 11.93% compared to the record-breaking 2018 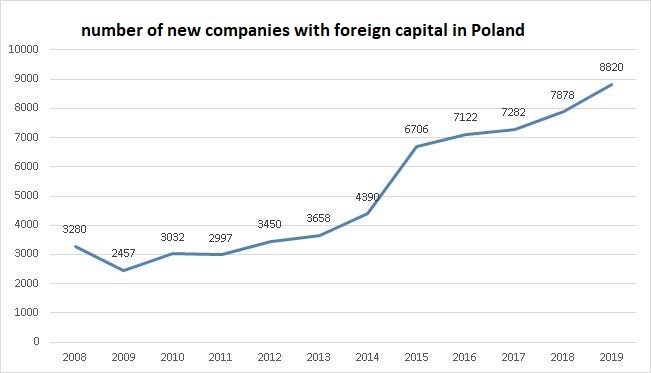 The first of these barriers are language differences, people in Polish offices often do not communicate in English. So it’s good to have someone who speaks Polish with you. Similar problems arise in banks when a foreigner wants to set up a bank account. Employees often speak only basic English and are unable to help foreign clients in case of any problems. Entrepreneurs from abroad face more stringent requirements when applying for a loan at a bank, e.g. for company development.

There are still problems with the clarity of information provided on the establishment of companies by foreigners in Poland and not all information is understandable to them. There is a need, therefore, to access reliable and complete information, and to improve and facilitate the process of exchanging information on establishing and running your own business or company, and interpreting the relevant provisions.

Issues related to taxes and the social security system are a problem for foreigners. They often do not know how to apply the law in practice or do it incorrectly. The system is complicated and, in the opinion of some entrepreneurs, discourages them to establishing a business in Poland. Entrepreneurs often decide to set up a company in a country where tax systems are more favorable. Simplifications in this process could increase the number of investments in Poland.

Difficulties in legalizing stay based on conducting business activity in Plan. It is still a big challenge for foreigners, the requirements set in this process are high and often impossible to reach. Foreigners, if they can, try to legalize their stay on another basis. The law is often interpreted by officials in a way that is unfavorable to foreigners.

There is also a problem of graduates of Polish universities who after graduation can stay and work in Poland without a permit, but can’t run a sole proprietorship. Although many initiatives supporting entrepreneurship are already available on the market, there is not enough offer addressed especially to foreigners.

According to surveys conducted among foreigners, the following barriers are also: excessive bureaucratic obligations and labor costs. Even if taxes cannot be reduced, tax law should be simplified and more easily understood. The situation on the Polish labor market is stable, but high non-wage labour costs have a negative impact on entrepreneurs and employees. Small companies often do not employ more employees due to high employment costs. The unclarity of the law and its frequent changes are also a barrier.

In Poland, it is easier to find highly qualified employees for your company. Many young people have higher education and qualifications, so finding employees for e.g. an IT team is not a problem.

The possibility of registering a limited liability company via the Internet, which is a great convenience for foreigners who are not in Poland. They can start a business without leaving their country.

Due to Poland’s good location in the center of Europe and well-developed infrastructure, establishing a commercial company in Poland is a good idea. The communication network allows for fast and efficient transport of goods to European countries.

Although tax rates in Poland are not the lowest in EU, they are still considerably lower than in most of well-developed EU countries, such as France, Germany, Scandinavian states.

Poland is a country with a stable economic situation, as one of the few countries that didn’t experience recession and economic inactivity, but is still developing. So it is a safe country to invest and start a business.

Working with Poles is easy, there are no major cultural barriers. Poles are friendly to foreigners and open to other nations. Living in Poland is cheaper than in other European countries.

Poland creates a friendly climate for investors and offers clear tax and legal rules. Poland also offers many investment incentives, such as special economic areas, tax breaks, employment facilitation, investment areas and more. In Poland, you can find companies dealing with consulting in choosing the right business activity in Poland and explaining all legal ambiguities.

Starting a business in Poland

According to data, there are more foreigners who are opening their own company in Poland. Popular industries are transport and trade. Definitely the most frequently chosen legal form of companies created in Poland by foreigners are limited liability companies. In 2019, as many as 19.4 thousand foreigners started a business in Poland, by 4.5 thousand. more than four years ago.

More than half of foreign companies are created in Poland by citizens of countries located east of our country, namely Belarus, Ukraine, Russia and Georgia. They set up and run specific service activities with us, mainly in transport, construction, gastronomy and employee recruitment. Increased business establishment by foreigners from Asia is also observed.

Foreign investments in 2019 supported by the Polish Investment and Trade Agency (PAIH) reached a record amount of EUR 2.9 billion in Poland. In 2019, foreign companies implemented 56 projects in cooperation with PAIH, while in 2018 – 71. Although the number of investments decreased, their value increased. This means that the projects were larger. Large foreign investments in Poland have a positive impact on the development of our economy and give additional job places. The Korean company SK Innovation has decided to invest in our country. For the amount of EUR 335 million – PLN 1.4 billion, it will build a factory of battery components for electric cars in Dąbrowa Górnicza. On the other hand, the British Johnson Matthey will build a factory producing battery materials in Konin for almost a billion pln.

The Polish Investment and Trade Agency currently supports almost 200 investment projects. In the opinion of the Association of Business Service Leaders, for Poland to attract more investment creating high-quality jobs, it is necessary to ensure tax stability. ABSL also recommends facilitating the legalization of stay for highly qualified foreign employees.